The Dynamic Routes module for FreePBX lets you route based database lookups, asterisk variables, agi 's.  The version I'm testing with is in the ISSABEL distro.

For these examples, i created an extension "1000" in the PBX, most of the examples here are based on this.  Feel free to try, just substitute 1000 for an extension in your PBX.

EXAMPLE 1:
Hardcoded SQL LOOKUP
This will do a hardcoded lookup for a value.  In this case the system will see if the hard value of "1000" exists in the extension column of the "USER" table in the "ASTERISK" database.

I'm doing lookups in the SQL database that exists, but you could easily make a table and put in your own values.

Here is what my Dynamic Route looks like for a hardcoded SQL data lookup. 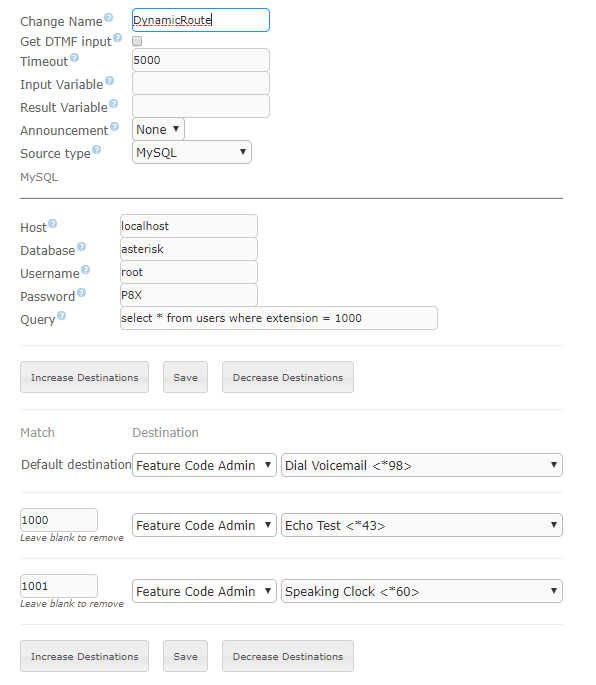 The script is executed and will always look for extension 1000.

The result of this will be a match, and the ECHO TEST will be executed.

IF the SQL statement were to change to hardcoded value "1001"

If the script were run, this script would FAIL because 1001 does not match, and it would DIAL VOICEMAIL.

EXAMPLE 2:
DYNAMIC SQL lookup based a caller entry in an IVR.
This would be useful for something like a user needing to input their ClientID # or a password or something.

When this script is activated, the caller enters input into the IVR (DTMF tones), then matching the input and routing.

So this example you enter the dynamic route, enter in 1000# (1000 is saved in variable 'extension'

The INPUT VARIABLE is "extension" 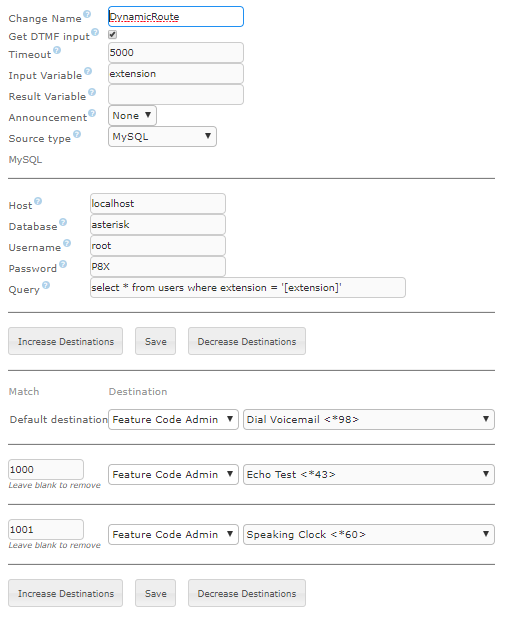 (note the '[varname]' that you enclose the value with a single quote and square bracket.

The system will respond as a match, and will play an echo test because it will match.

EXAMPLE 3:
ROUTE BASED ON ASTERISK VARIABLE

Here the system will route based on the internal asterisk variable "AMPUSER" which is the extension of the person making the call.

We set the SOURCE TYPE to be asterisk variable

In the Variable String we put in the asterisk string ${AMPUSER} 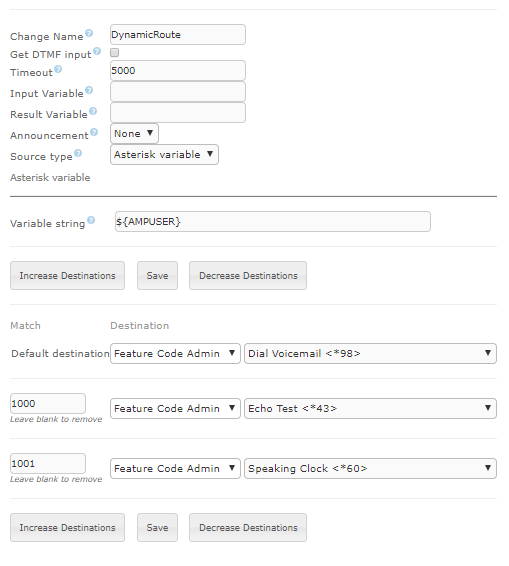 If there is no match, the system will play "DIAL VOICEMAIL"

EXAMPLE 4:
Route based on a URL result

This one is a little more strict, has quite a few limitations, basically you can only use it for text returns from a URL that are very simple.

You should get something like : "The selected menu is not valid"

So, if you get data from a really SIMPLE site, you can route on the return! 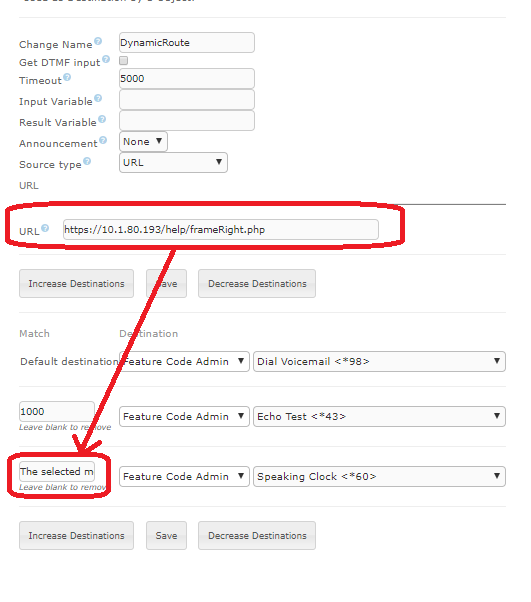 Now I've copy and pasted the EXACT return into the box, that if the system matches, it will activate the SPEAKING CLOCK

The selected menu is not valid.

Now when I run this, it will goto that URL, there SHOULD be a match, and then it will play the clock.

For troubleshooting, if you put in a URL, and then run the script, you'll see a log entry like this:

Notice how "dynroute=" the data the url will return.

This is as far as I've taken the URL at this point.

EXAMPLE 4:
Route based on a AGI result

I haven't done a lot with the AGI, but here is a demo config of kind of how it would work 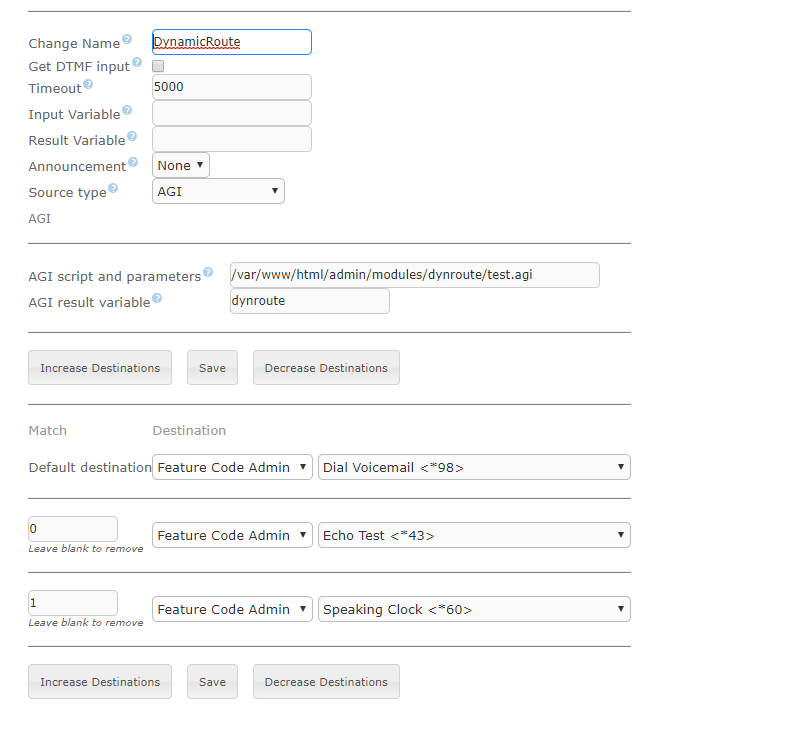 We set the value as AGI.
AGI Script and parameters we point to an AGI script.  There is a test one that you can use
/var/www/html/admin/modules/dynroute/test.agi

I haven't really gone through this AGI, so i'm not 100% sure how it even works.  Anyone reading this who can shed light on how it works I would love to know, leave a comment!

When you call the AGI and pass it paremeters, the data will come back.

In the above example, we call the AGI, it returns with the hardcoded variable DYNROUTE value of 0

We can then put the values we expect and route.  In the example, we send the call to "ECHO TEST" if it returns a 0.

The information below comes from http://www.voipsupport.it/wiki/index.php/Dynamic_Routes_Reference_documentation

The following information documents how to fill in the fields of a Dynamic Route. This documentation refers to the V13 functionality. Not all options are available in previous versions.
Source Type
The following are the currently available source types for lookups. Each source type has its own specific fields for defining the lookup parameters.
Substitutions
In the lookup
When defining the query field for the lookup, the following Variable Names will be substituted by the corresponding value at the time of the call routing.
In custom dial plan or other FreePBX modules

Posted by Random Contributions at 3:11 PM